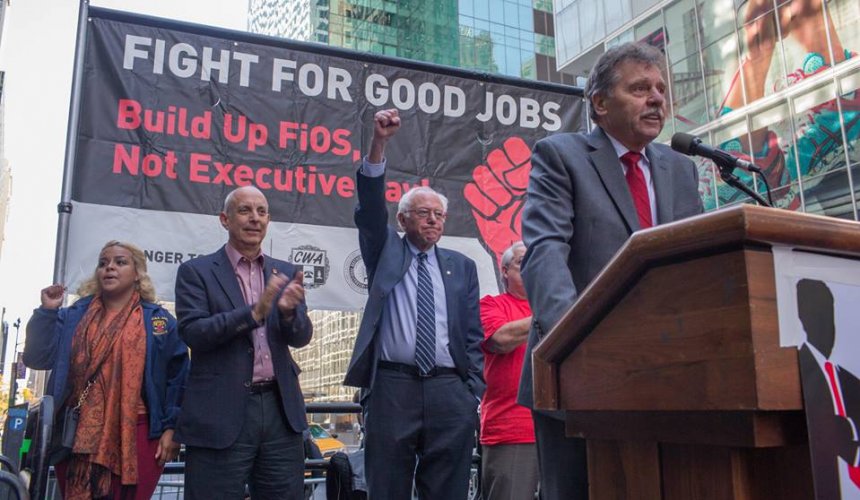 Citing the need for a candidate who will break with politics-as-usual and fight for America's working people, the Communications Workers of America (CWA) voted Thursday to endorse U.S. Senator Bernie Sanders for president in the 2016 election. With 700,000 members, CWA is one of the largest unions in the U.S.

The decision followed a 3-month democratic process, including hundreds of worksite meetings and an online vote by tens of thousands of CWA members on which candidate to endorse.
"CWA members have made a clear choice and a bold stand in endorsing Bernie Sanders for President," said CWA President Chris Shelton. "I am proud of our democratic process, proud of CWA members, and proud to support the candidate whose vision for America puts working families first. Our politics and economy have favored Wall Street, the wealthy and powerful for too long. CWA members, like voters across America, are saying we can no longer afford business as usual. Bernie has called for a political revolution - and that is just what Americans need today."
CWA's 700,000 members represent a cross-section of America's workers, working in industries spanning telecommunications, airlines, media and broadcast journalism, health care, public service, and manufacturing. The top issues motivating the endorsement of Senator Sanders - taking on the big banks and Wall Street, providing our children with debt-free higher education, getting big money out of politics, rebuilding the labor movement, stopping job-killing trade deals, affordable health care, and retirement security - reflect the priorities cited by our members and all working Americans nationwide ahead of the 2016 election.
Shelton continued: "Bernie Sanders stands with working families against corporate greed, against Wall Street and the big banks, against politics as usual. He stands against the flood of money in politics that's corrupting our democracy and attacking the right to vote. He knows that we have to take on the rich and powerful special interests to turn around this economy and end the 40 years of stagnant wages that working families have endured.
"He's the candidate who can do it, and we are going to help him. When CWA endorses a candidate it is just the beginning. Our 700,000 members are fired up, and we are going to work overtime to elect Bernie Sanders as the next President of the United States. "
CWA members' endorsement of Sanders mirrors the deep desire among voters for an economy and political system that responds to ordinary Americans. In November, an NBC News/Wall Street Journal poll found that 69% of voters in both parties "feel angry because our political system seems to only be working for the insiders with money and power, like those on Wall Street or in Washington, rather than working to help everyday people get ahead."
CWA members have played a significant role in driving turnout in past elections. In 2012, tens of thousands of CWA member volunteers worked on national and state campaigns and for critical ballot initiatives. CWA had ground operations in 38 states, and CWA member-activists played a major role in Florida, Colorado, Virginia, Missouri, New Mexico, Arizona, Pennsylvania, and Ohio.
CWA has more than 300,000 active and retired members in the states that will hold primaries between now and April 1. In California, Texas, New York, New Jersey, and Ohio, where CWA has its largest numbers of members, activists are engaged in worksite actions, staffing phone banks, and signing up new contributors to CWA's political program ahead of the 2016 election.
Political Action

Today's Kitchen Table Economics from the @AFLCIO // 58 years: How long DoD workers have had their collective bargai… https://t.co/uU31RxSI2W