Get on the bus: Workers Stand for America Rally in Philly 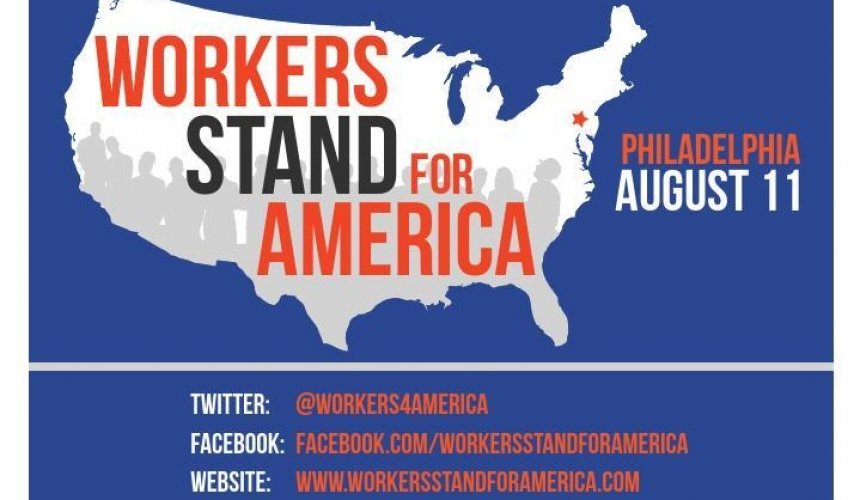 Our contract battle with Verizon has reached a critical time. On August 11th, tens of thousands of union members will be descending on Philadelphia, the birthplace of the nation, for a major labor rally demanding a Second Bill of Rights that guarantees the rights of workers and the protection of the middle class. We must make that event a time to send the message that Verizon is leading the corporate assault on American workers and their standard of living—and that we have no intention of going backward!

CWA and IBEW are mobilizing throughout the northeast for a rally at Verizon HQ in Philadelphia at 9:45 a.m. and then we’ll march to join the main rally which begins at 11 a.m. We need to send Verizon—and the nation—that we will not back down in the fight against Verizon or in the fight for the rights of the American worker.  Any CWA Member interested in making a reservation for our bus please call the Local Office at 516-420-1104.

Local 1104 will be  joining tens of thousands of working people from across the Northeast along with the national AFL-CIO, and the national Building and Construction Trades Department on Saturday, August 11, 2012 in Philadelphia to fight for the survival of America's middle class and an economy that works for the 99%.

Organized labor built the middle class in our country and is now leading the charge to preserve it. Thousands upon thousands of union members, students, social activists, and community partners from across the country will converge in Philadelphia to send a message that the middle class cannot survive in an economy that only benefits the 1%. We will send a message that America is not a plutocracy to be governed by the ultra-wealthy, but a democracy which bestows power to its people and equal opportunity to all.

Eakins Oval
(In front of the Philadelphia Museum of Art)

America is the greatest country in the world because we never stop improving ourselves. And on August 11th we are going to recognize the need for a Second Bill of Rights to ensure the American Dream is there for our children as it was there for us.