"Verizon has left us no choice but to strike..." 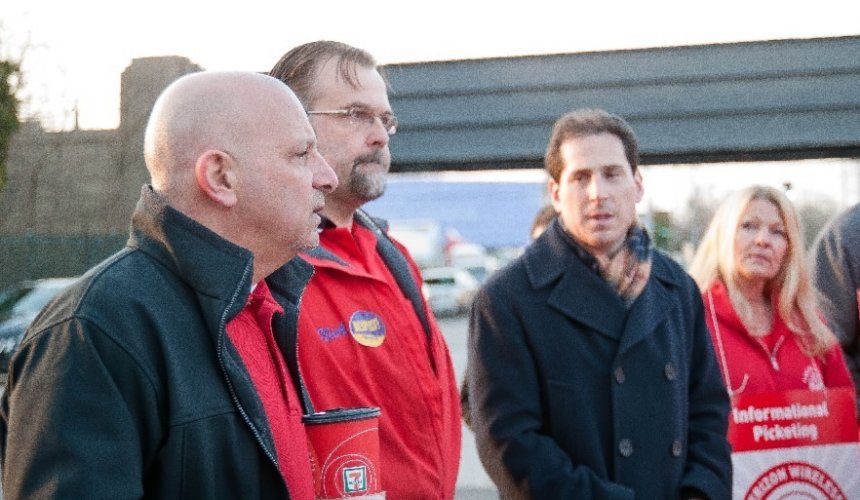 Today CWA President Chris Shelton announced that we will be going on strike against Verizon beginning Wednesday, April 13, 2016 at 6:00 a.m.

I know how difficult that decision was to make but I believe Verizon has left us no choice but to strike them and continue this fight on the street.

I have spent nearly 2 years up in Rye, N.Y. as part of the Regional Bargaining Team over the last 2 contracts.  It has been as frustrating and infuriating process as you can imagine.  This Company wants to continue to just flat out take money out of your pocket, PERIOD.  Whether it’s medical, pensions or work that you do, it’s just take, take, take.  At our General Membership Meetings or location visits I had been telling everyone there was a limit we can go to in order to avoid this.  How much are you willing to give up to avoid a strike?  The Union made a giant leap in medical last week as a last ditch effort to get a contract.  It’s also important to know we made these concessions based on meetings with CWA and Verizon Executives.  Quite frankly there were a few high level meetings where we thought we had a path to a contract, only to find out that what was discussed at those meetings didn’t translate to the bargaining table.  After the last event on Wednesday, the bargaining team had enough of the lies and decided we couldn’t go any further.  For me personally, I had been a strong advocate for trying to get a contract without a strike.  That ended for me on Wednesday afternoon.  The decision makers at Verizon are greedy liars who can’t be trusted or believed at all.  No bigger phony then Marc Reed.  He sends an email to our members to “get the facts straight” and then leaves out all of the pertinent facts.  For once and for all SHUT UP Marc Reed!  Keep your fairytales for YOUR TEAM to read, keep those fabrications away from our team.

This is where we are.  It’s time to put everything aside and focus on the fight in front of you.  No excuses, no complaining.  We will be giving directions to your leaders at your locations.  You are fighting for your careers, your benefits, the brother or sister you stand together with and most of all for your family.  Verizon doesn’t think we can do it.  I need each and every one of you to prove them wrong and to let them pay for causing this.  There have been generations of CWA members who have fought on the strike line before you and have paved the way for the benefits and language we have enjoyed throughout our careers.  Those retirees, whose benefits are being threatened as well as active employees, have been on strike in 1971, 1983, 1986, 1989, 1998, 2000 and 2011.  Now it’s our turn to take the battle on.  We can’t win unless we walk together and fight together at your work locations and at Verizon Wireless Stores.  Let’s put up strong, active and intelligent picket lines from day one.  Your time is now.  God Bless all of us as we take this on.

We will keep you informed through your leadership, the Local tape and The HUB email.

We want Local 1104 to be a Strong Union in CWA during this conflict as I know we can be.  I’m proud to lead us and you should be proud to be a part of it. Thank you.