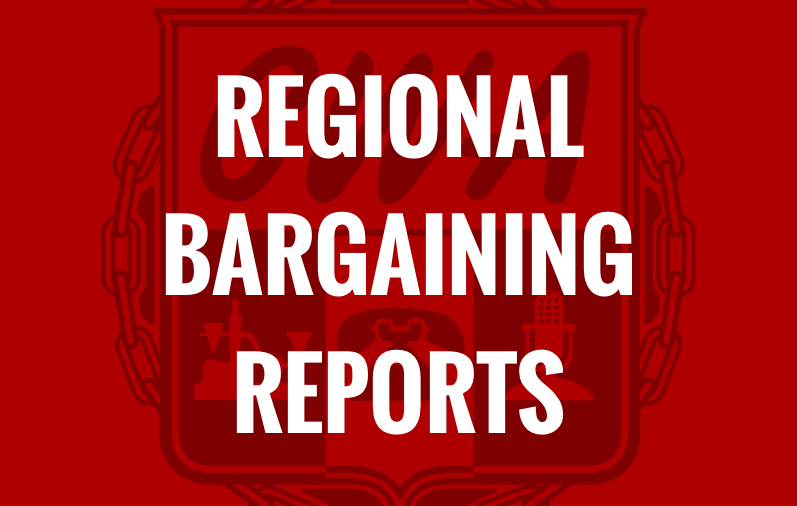 CWA District 1/IBEW Local 2213 and IBEW New England Regional Bargaining Committees met with the Company today at the Rye Town Hilton in Rye, New York.  The Regional Bargaining Committee gave the company our proposal on building out FiOS in all areas across the northeast, including upstate New York and New England cities, the Town of Brookhaven, and eastern Suffolk County.

In order to help us make our case to the company, three special guests joined us:  Mayor Stephanie Miner of Syracuse, Mayor Shayne Gallo of Kingston, and Bob Master, District One Legislative and Political Director.  After we presented the demand, the Mayors forcefully told the company how important it is to get FiOS in the cities they represent.  They said the absence of true high-speed internet in their communities is hindering educational, cultural and economic development. Both gave several examples of how job-creating economic and cultural projects could not move forward because of the lack of high speed internet.  Mayor Miner even told the company how frustrated her family is that they have no alternative to Time Warner service, which is expensive and has repeated outages.  Mayor Gallo talked about ongoing construction projects in Kingston, including a new high school and a branch of Ulster County Community College, which desperately need FiOS service.  Bob Master summed up our presentation by explaining that our members' interest in jobs and job security is directly linked to the public interest, as reflected in the presence of the Mayors today at the bargaining table, because maintaining the legacy network, and building and installing FiOS is what our members do and what the public needs.  He questioned whether the company still holds on to the commitment it once had to meeting the needs of the public, and said that the union is baffled by the company's failure to take advantage of Governor Cuomo's $500 million New York Broadband Program which is available to subsidize the buildout of high-speed internet in underserved communities. This would sharply reduce the company's own investment costs in building FiOS in NYS.

The company's bargainers took extensive notes on the presentations, but did not respond to any of our presentations at the bargaining table. Instead Verizon chose to use a company spokesman to blast the Union in the press for including the Mayors in the negotiating process calling it a “publicity gimmick”. Does the Company actually believes that the Mayor’s constituents need for reliable high speed internet so underprivileged children can have additional educational opportunities and the economic growth of the Mayors regions are Union gimmicks or do they just not give a SHIT about the consumers in there footprint?

In addition to having Mayor Miner and Mayor Gallo at the table today, the Union presented letters which echoed the two Mayors and also asked for FiOS in their communities from Mayor Robert Palmieri of Utica, Mayor Joseph Fusco of Rome, Mayor Kathy Sheehan of Albany and Supervisor Ed Romaine of the Town of Brookhaven.

It is time that Verizon invests in America and build FIOS through out there footprint.  Corporations like Verizon should not be destroying middle class jobs. They should be helping to rebuild the American economy and sharing their success with the workforce that made that possible.

It’s time to fight back!

Turn up the Heat in your Work place

Now more than ever we need to mobilize!